The topic of hydrodynamics covers all research performed to improve the understanding and modeling of physical phenomena encountered in a marine environment, such as waves, currents, interaction with ocean structures, sediment transport. It naturally includes the continuous development, starting in 1991, of our coastal wave agitation simulation software SIMAC. It also includes our research in the field of optimizing unmanned mobile subsea machines, or gliders, dedicated to collecting marine environment data. 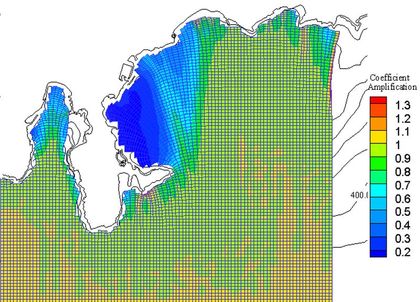 Since its creation, ACRI IN has developed a large part of its calculation codes directly related to its areas of expertise, especially in coastal hydrodynamics, to remain in the forefront of digital simulation, notably concerning wave propagation and the study of floating and submerged structure behavior under the influence of swells. The design and development of the string of software modules in SIMAC started in 1991, and it is still being improved today. The two primary modules are:

ACRI-IN's R&D department also has upgraded the connection between SIMAC-AGITATION and the propagation calculation code in REFDIF. This offers the benefit of being fast and stable, and is an alternative to SIMAC-POSEIDON for some study site configurations to which it is better suited.

The objective of Project SeaExplorer is to design, develop, test and then build a prototype underwater glider that is strong enough to penetrate the ocean measurement market. This type of remote machine, designed to consume the least amount of power, has the ability to cover several hundreds, and even several thousand kilometers of ocean, measuring targeted physical parameters of the marine environment. This considerably reduces the cost of the measurements compared to a traditional campaign on a special purpose ship. In this configuration, the machine will be used to cross seas and oceans, communicating its positions and potential warnings via satellite.

The objective of the VASQUE research project is to design a hybrid machine combining a glider with propulsion without degrading its ability to penetrate to the ocean depths for an optimum energy cost. The VASQUE project will complement the range of SEA EXPLORER gliders. The originality of this machine compared to existing machines is its ability to combine two motive forces. 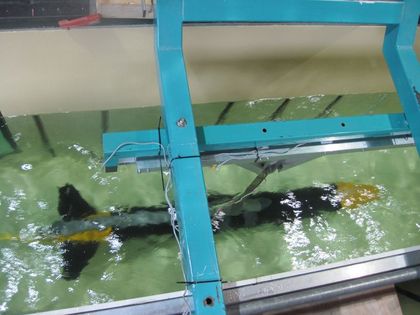 ACRI-IN's contribution to the overall program consists of researching and validating the machine's physical form and parameters to optimize its capacity to "fly" and its propulsion.