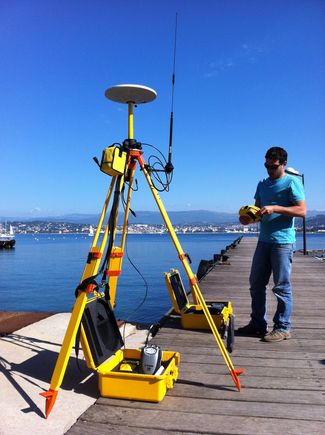 ACRI-IN owns a Trimble GPS that we use to perform topographical surveys of a terrain. The data collected is used to develop a map which graphically represents the elements surveyed such as buildings, roads, vegetation, as well as variations in the level of the land (altimetry). A 3D Digital Terrain Model (DTM) can be generated from the data using software.

To get precision down to the centimeter, we use real time "RTK" surveys: a fixed GPS is placed in a reference (known x, y, and z coordinates) or unreferenced location, which continuously records its position. A mobile GPS connected by radio to the fixed GPS is used for the topographical survey. This combination gives a precision down to 1 cm horizontally and 2 cm vertically.

ACRI IN owns an Ohmex Sonarmite single beam echo sounder that performs precise bathymetric studies of the ocean floor. The data collected is then used to create a digital terrain model (in 3D).

Using the same principle as for the topographical survey, the sounder is connected to a mobile GPS located on a boat. This combination lets us survey depths over a working range of 0.30 m to 75 m of depth with a sounder precision of +/- 2.5 cm, and a GPS precision on the order of 1 cm horizontally and 2 cm vertically. 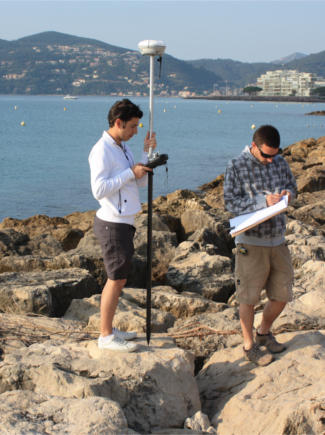